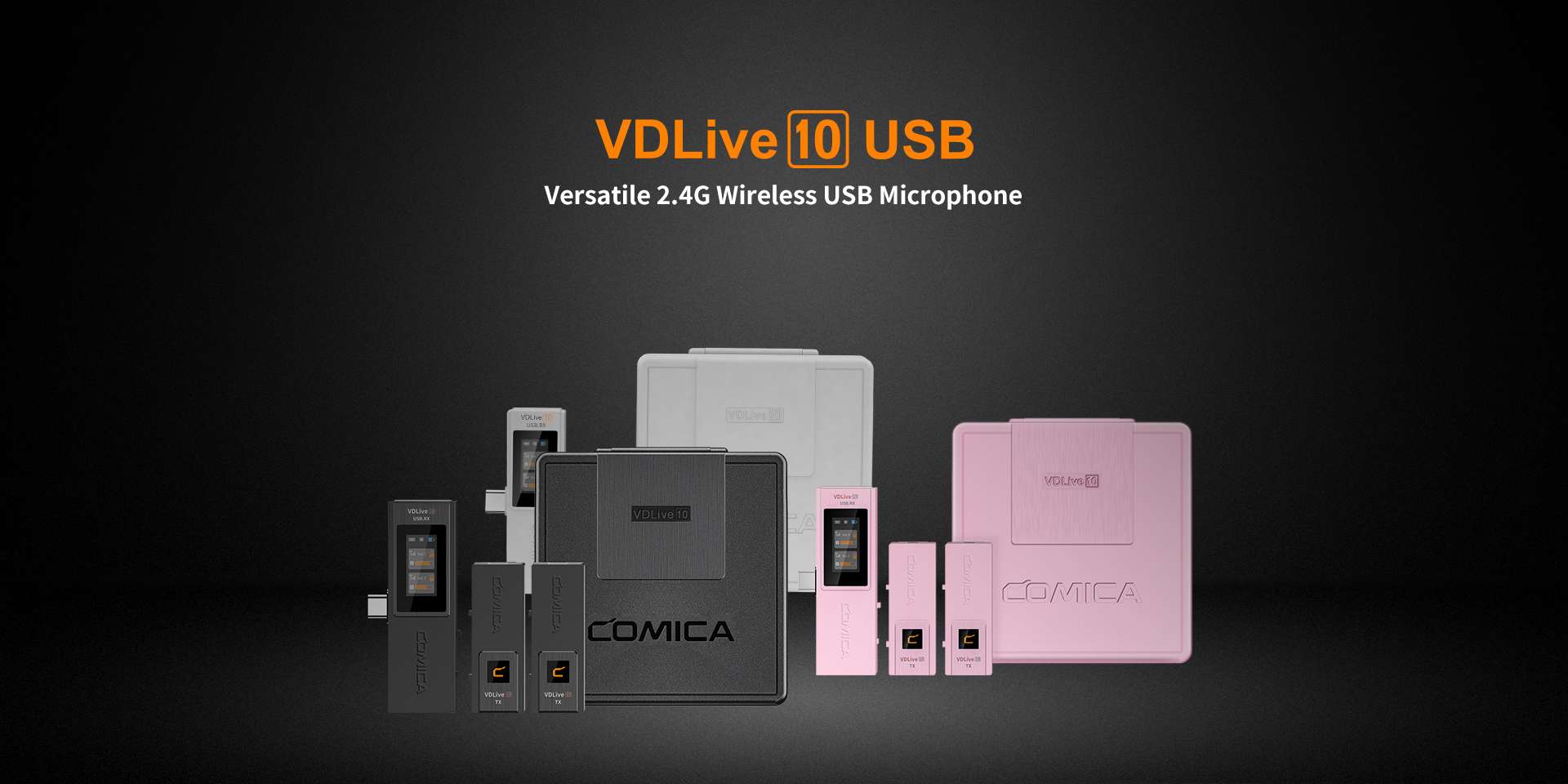 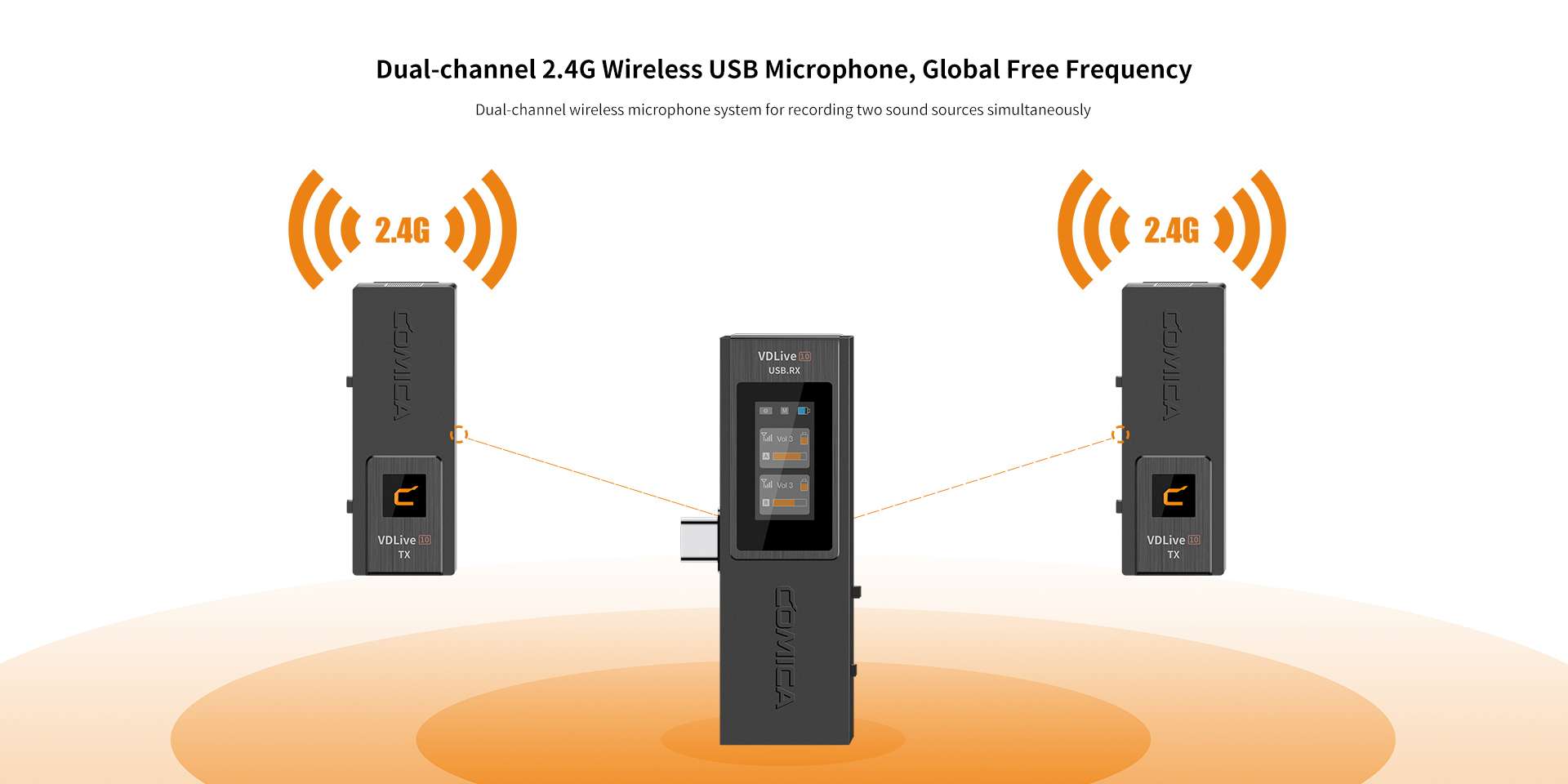 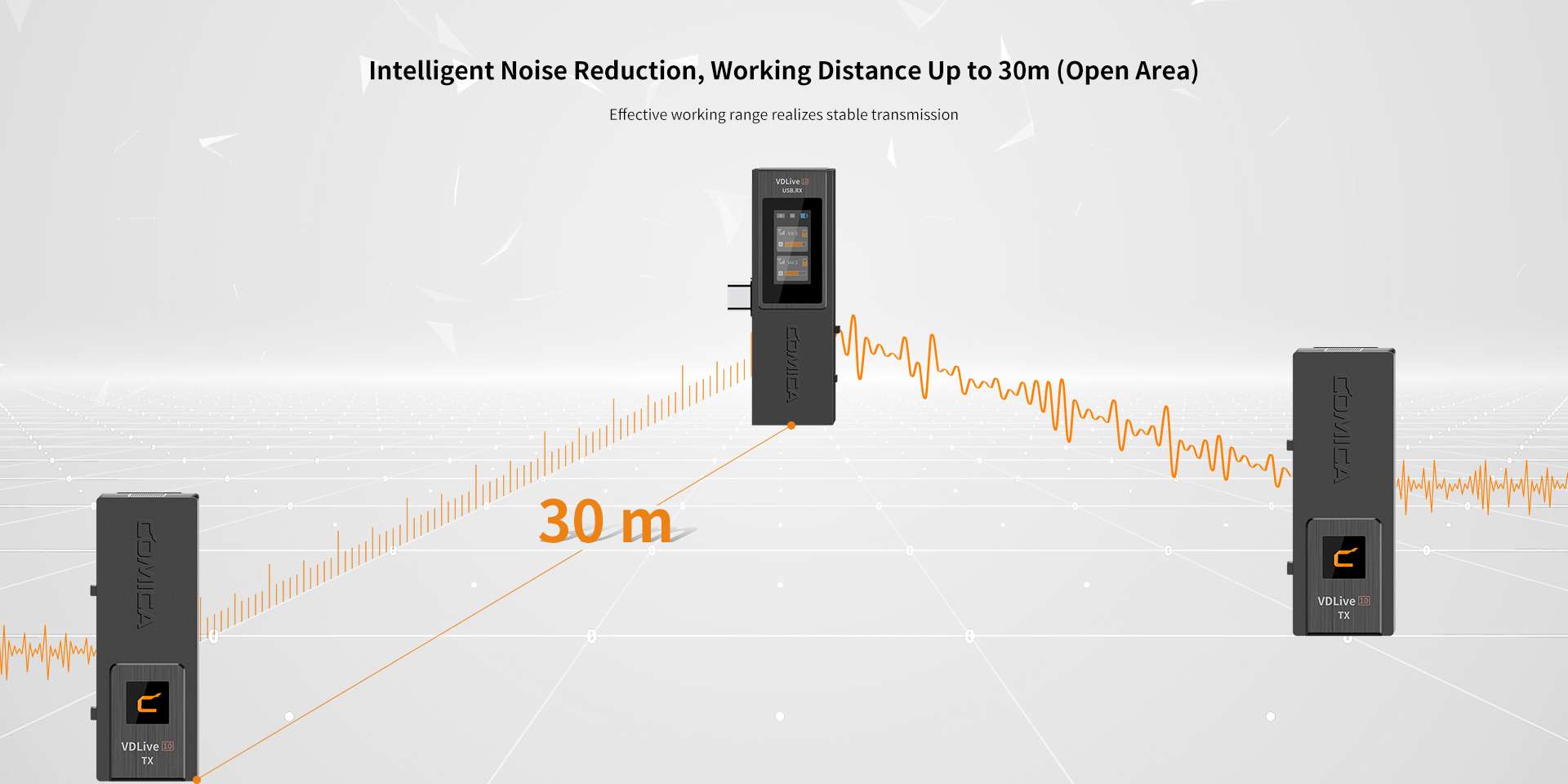 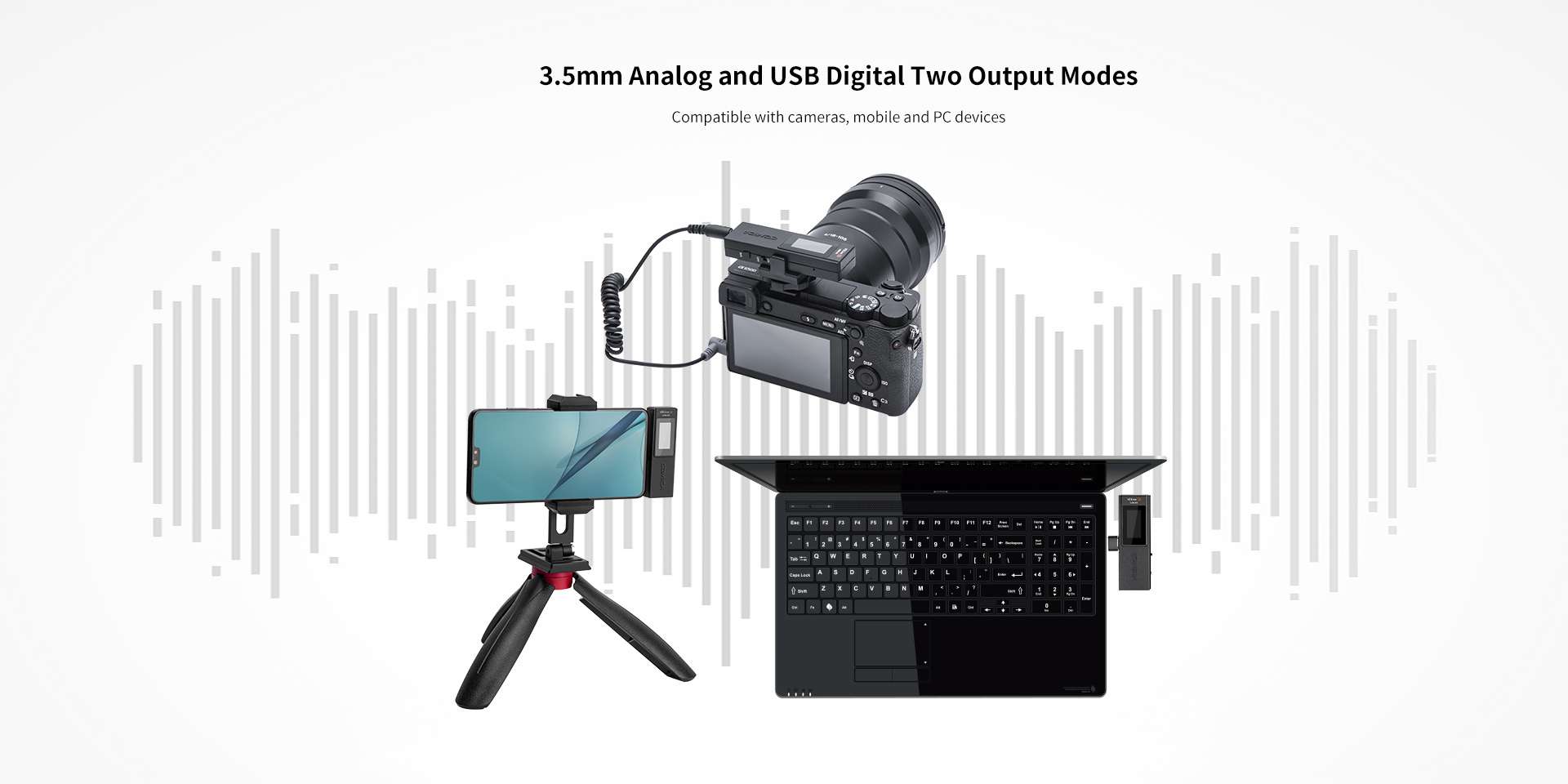 Designed for two on-camera subjects or performers, the black Comica VDLive10 is an ultracompact and lightweight true wireless digital microphone system with two microphones, a single dual-channel receiver, and a charging case with a built-in battery. It offers a portable solution for recording dialogue, interviews, and speech with two people talking simultaneously—directly to a USB Type-C device such as an Android smartphone. The receiver also offers a 3.5mm output for monitoring or recording to a camera.

The system consists of two ultracompact clip-on transmitters, each with its own built-in omnidirectional microphone along with a 3.5mm external input for use with a lavalier mic (available separately). It also comes with a tiny receiver that mounts on and plugs directly into the USB Type-C port of your phone. To ensure that you are capturing a clean signal, you can monitor your mics via the receiver’s 3.5mm headphone output while recording. Alternatively, you can use the 3.5mm output to connect to a DSLR or mirrorless camera. A camera shoe mount and coiled connection cable are supplied.

The system is designed to deliver reliable transmission at a distance up to 98′. The transmitter and receiver both feature built-in rechargeable batteries that provide up to 4 hours of operation. The charging case features a built-in battery that recharges via USB. The system is easy to use for content creators at any experience level.

Record Two Microphones on Your Phone or Camera with One Receiver

The tiny dual-channel receiver allows you to use just one receiver to simultaneously receive signals from the two mic/transmitters—saving space on your phone shooting rig.
The receiver plugs into the USB Type-C port to record audio to your mobile device.
For camera use, the included adapter lets you mount the receiver to your DSLR/mirrorless camera shoe, a TRS cable is included to connect the receiver’s 3.5mm output to the camera’s external input.
Built-In Mics for True Wireless
Each transmitter is equipped with a built-in microphone and a 3.5mm mic input that accepts an external lavalier microphone.
For a truly wireless experience, the transmitter can be clipped on clothing without having to wire yourself or your talent. You can also hold the transmitter in your hand and use it as a handheld microphone.
2-way transmission lets you use the 3.5mm jack on the transmitter to monitor both the transmitter and the device the receiver is connected to.
A side switch on the transmitter supplies mute and volume control.
A second side switch toggles between Off, Simplex (one transmitter), and Duplex (two transmitters) modes.
Wind muffs are supplied to reduce wind noise for outdoor shoots.

This plug-and-play system is simple to use and comes pre-paired at the factory.
An easy-to-read IPS screen on the receiver shows signal strength, audio level, mono/stereo configuration, and battery life.
You have the option to switch between mono or stereo on the receiver: Recording in mono combines both microphones on both the left and right side of your audio track. Recording in stereo puts one person on the left and the other person on the right, allowing you to isolate each person’s dialog and adjust each level individually later in post.

Whereas typical analog wireless systems are susceptible to interference from TV and radio waves, the VDLive10 digital system avoids that by operating in the 2.4 GHz frequency band, which occupies frequencies beyond those of television, radio transmissions, and UHF wireless microphone systems.
The system features a maximum line-of-sight distance of up to 98 feet. For optimal performance, environments with limited Wi-Fi/2.4 GHz traffic and minimal physical obstructions are recommended.
The system’s digital processing offers a low latency under 20 ms. 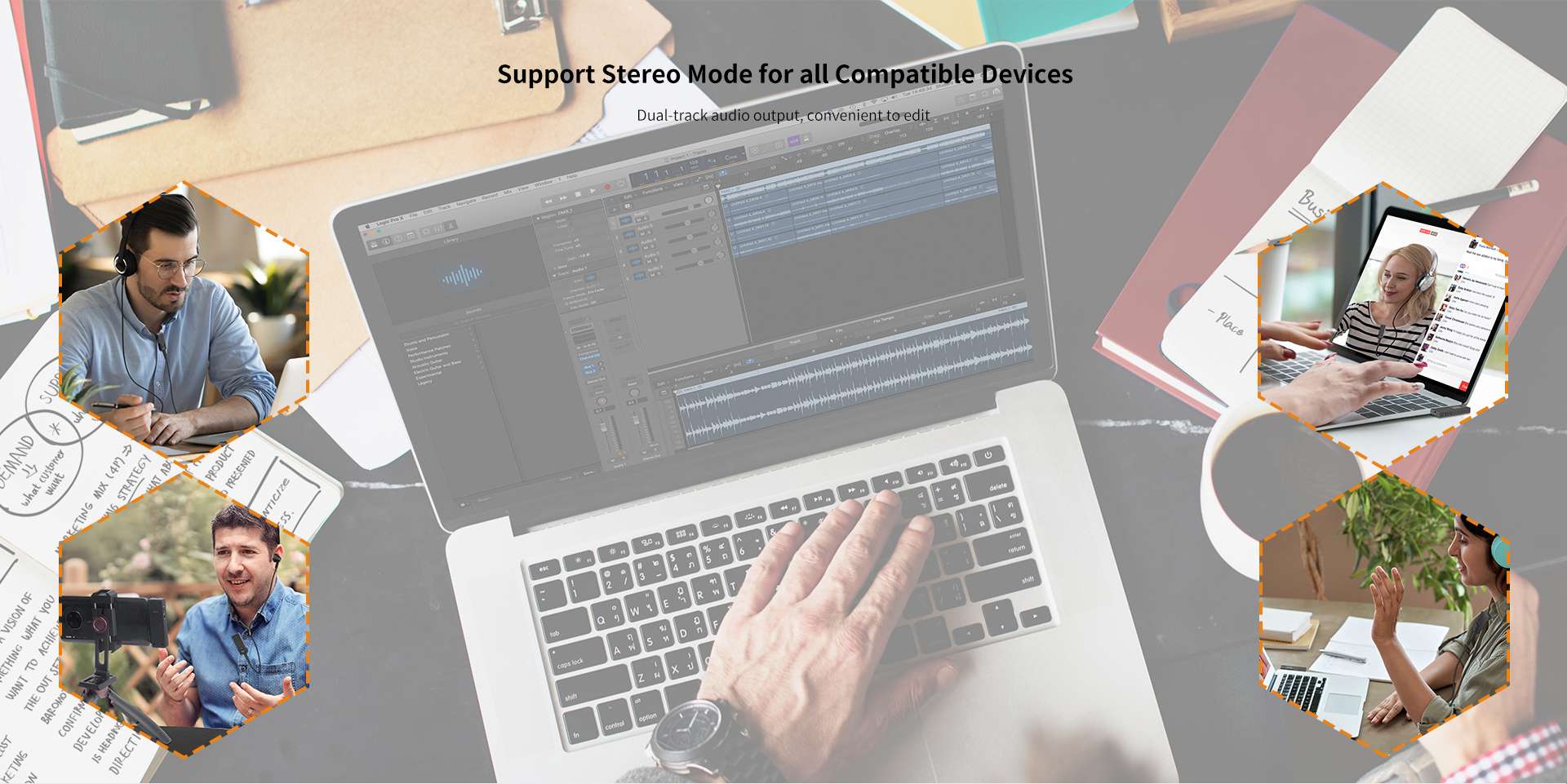 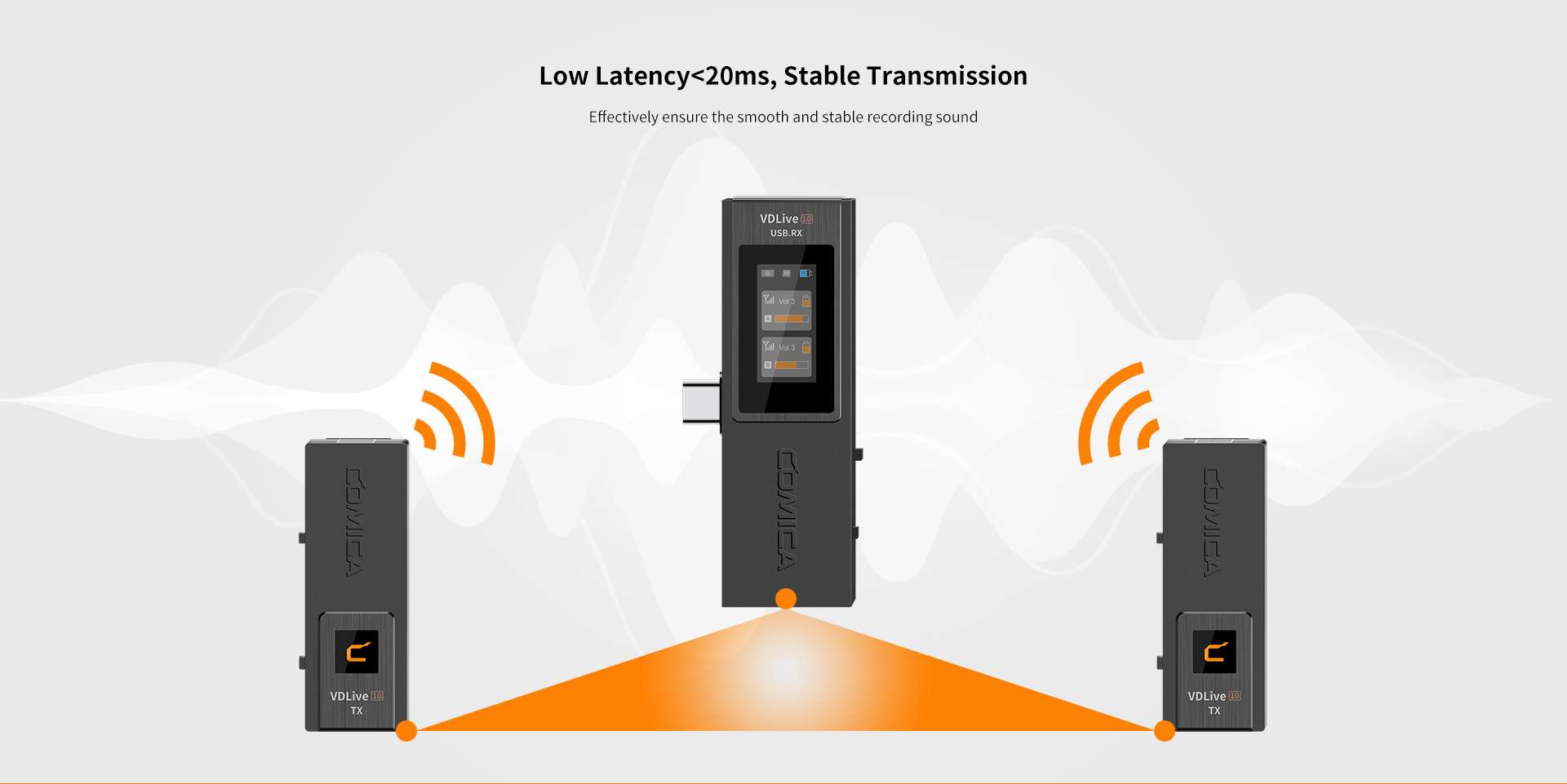 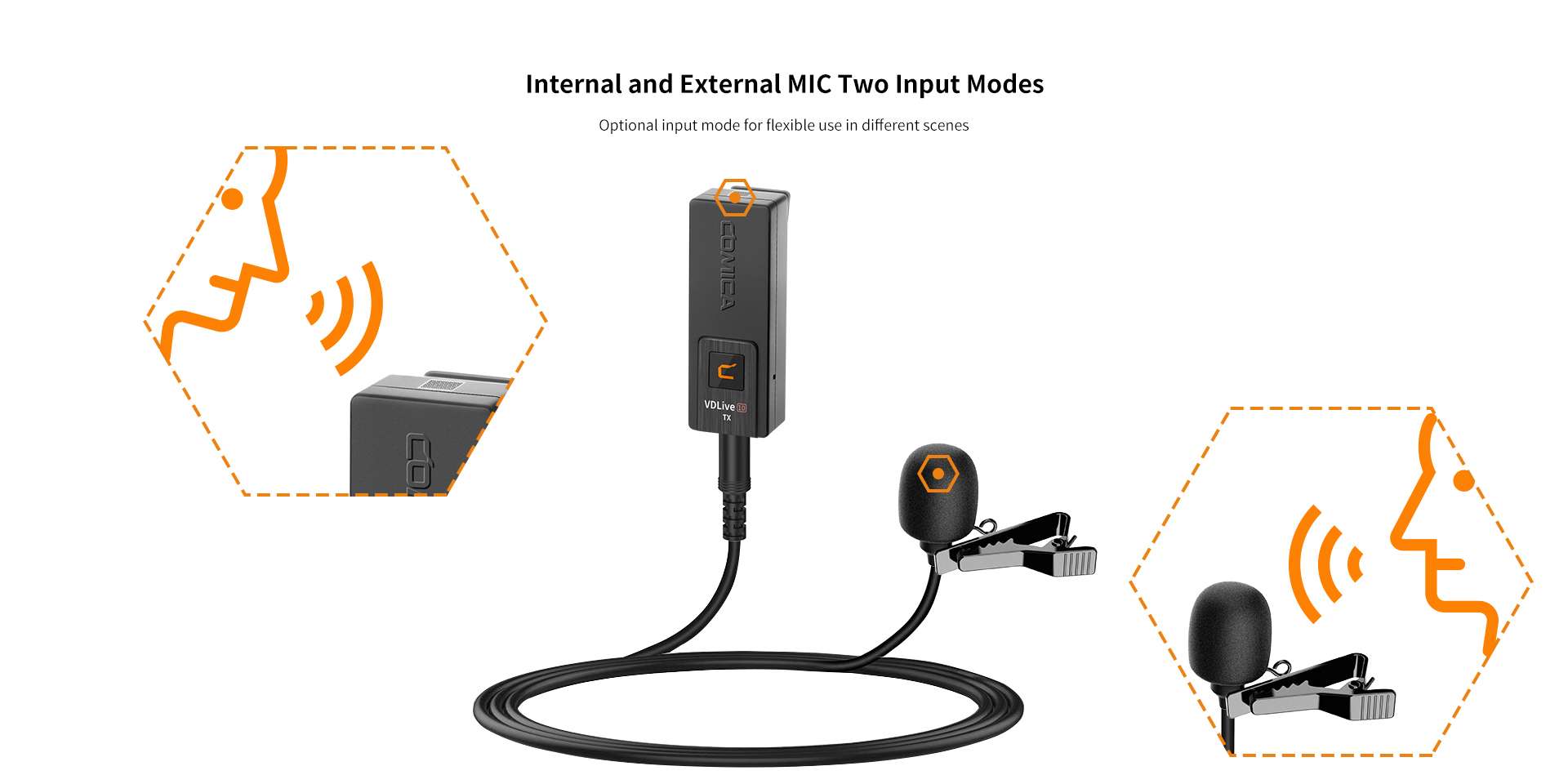 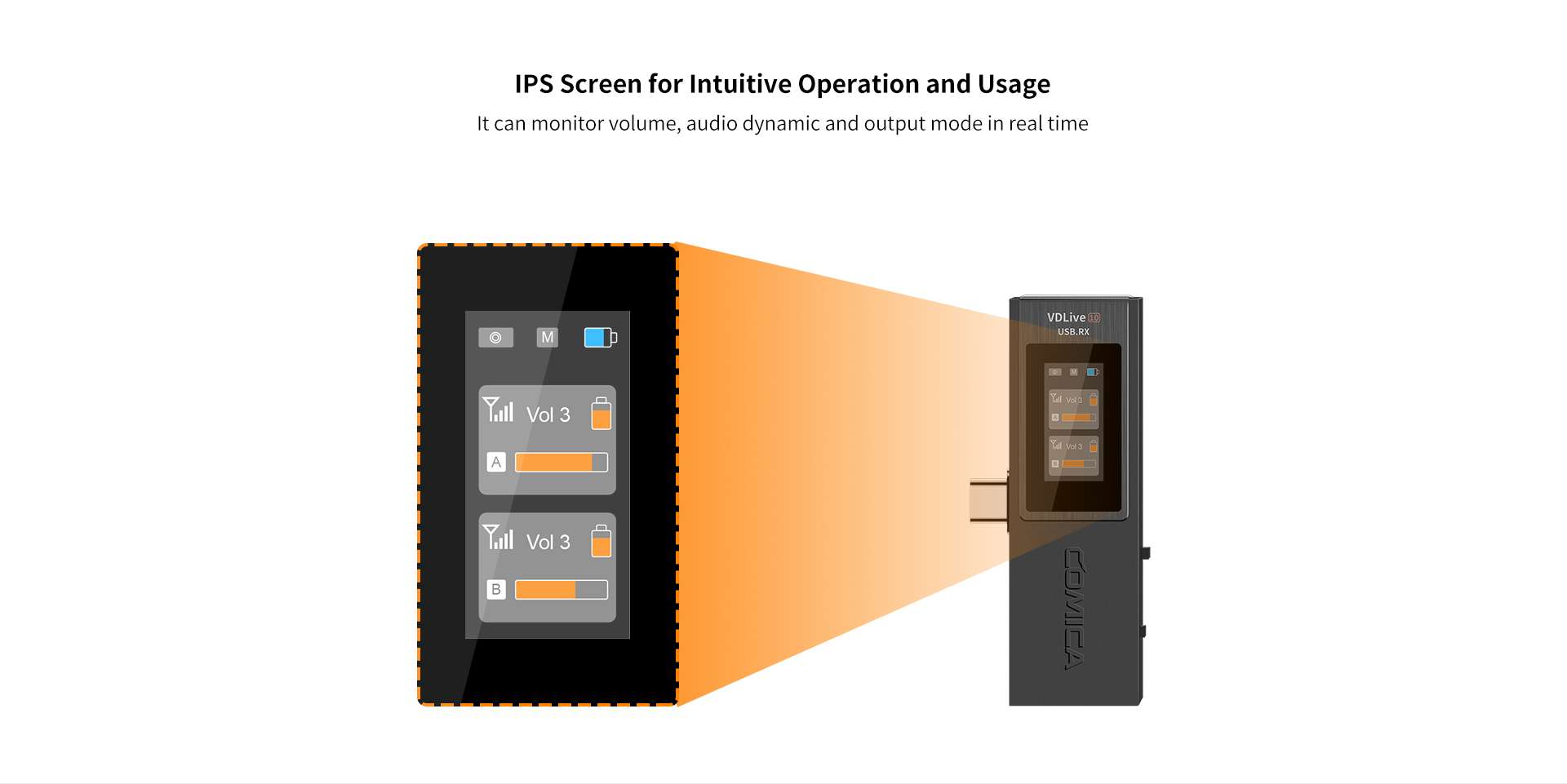